Flying ships are one of the more rare ship types found in Warship Craft. Designs vary, and glitches used to allow their flight also vary, but the one thing in common they all have is the ability to "fly". This usually gives them a significant advantage in combat, as it is very difficult to sink them unless you have good speed, armament and weaponry.

Most flying ships fall into the class of "super-warship", and as such, often are armed with typical battleship/aircraft carrier weapons:

and other weapons, depending on the ship builder.

Most flying ships will be very slow. This is due to their odd size, weight and shape. As such, it is very hard to exceed 30 knots with a flying ship, however, with extreme testing and trial and error, it may be possible. It's very hard to change, because, like submarines, flying ships are very fragile; an extra kilogram could make it topple.

"Floating block" flying ships often have nothing to fear except for anti-submarine warfare, the reasons will be explained later in this article. A flying ship can just shoot down from the sky at any ship that dares to come nearby, and adding planes to your ship can make it almost unstoppable. The height also means that it is really hard to hit, so one does not need to dodge shells, and the only worries that need to be actively addressed are aircraft. However, all these factors eventually become irrelevant after flying high enough. One of weaknesses of the "floating block" flying ship is that most of the time a rotation glitch will occur, which on the good side keeps the ship from capsizing due to height, but also causes turning to become impossible.

In the game, guns cannot hit flying ships in the sky flying at an altitude beyond 500 meters, except the use of the Harpoon missile, Tomahawk missile, or aircraft. You might feel there is no way to kill flying ships, but according to the Battleship Craft wiki, it can be possible to destroy them, provided know what to do. One important tactic is to never aim for the ship itself when battling a flying ship. Instead, shoot the area under the ship, allowing the high arc of most guns to be used against the flying ship. Once you have crippled the ship, and it is forced to land, it is easier to kill their weapons. Also, another strategy is to use anti-submarine warfare. If you can damage the underwater section of a flying ship with a base, you can also kill it that way. If you are unfortunate enough to encounter a flying ship flying near the height limit of 5 kilometers, or are just not well armed to take down your opponent, it is near impossible to manage surviving the match.

There are 3 known ways to create a flying ship. Interestingly, both ways appear to utilize the "floating block" glitch, albeit in different ways. Because of the involvement of this glitch in the construction of flying ships, I will explain how it works here.

How to perform the "floating block" glitch

First of all, have 2 or more blocks connected to a center block. The center block is the one that will be removed, and the outer blocks will be the ones that are floating, so choose your blocks carefully (eg. if you want to make a floating gun, you put a gun on top.) There is a small chance of data corruption so backing up your device is a good way to make this procedure foolproof. Once you are ready, delete the center block. A dialog box should come up, with 2 options: fix, and cancel. Hold down the power button and the home button at the same time, until your device shuts off. Once it is off, proceed to turn it on again. After re-opening Warship Craft, the reboot should have caused the center block to disappear, allowing you to drag the outer blocks apart.

The first way is to use the "floating block" glitch, which allows a player to separate their ship into multiple parts that are not connected. Once the glitch has been accomplished, you can drag one of the blocks a kilometer or two high, and create the flying ship proper. After the first section is completed, you can turn to the base. The base should contain the propulsion of the ship. If your ship won't fly, try making the base bigger.The disadvantage is that the base is broken, will lose support and then sink.

The second way is a sans-base flying ship, which uses the buoyancy of the sphere, which floats in the air, in the upper layer, and the lower layer uses some ballast to keep its flight stable. Firstly, it is important to note flying in Warship Craft is very hard work for the builder, so you must be able to patiently adjust your ship's balance and weight, and sometimes might have to rely on luck.

There are two different kinds of flying boats, one of which is called "balloon", and the other called "flying rudder", where the more common of the two is the "balloon". Due to the limited payload of the "balloon", in order to carry more weapons and improve the speed, when manufacturing more than 5 tons of materials the density must be maintained at 0.2 or less. The difference between balloons and flying rudders lies in the draft. Balloon have a draft of 0 meters, with the initial height in the sky around 300-500 meters, and for flying rudder draft generally is around 300-500 meters, initially floating on the surface of the water. The in-surface acceleration and launch the rudder effect from the surface of the water take-off. Flying rudder for ships flying with balloons floating and helicopter different suspension, similar to the modern aircraft trajectories, run-up, take-off.

First, preform the floating block glitch with 2 blocks. Stretch the distance vertically to around 300-500 meters, and place a 12 x 12 platform of spheres on the top block. Replace the bottom black with a ballast, and place a depth gauge. Re-enter the game, and then you have a test flight template. You can then build your own personalized flying ship on this template.

The third way is an easier to make flying ship. However, the shape of it is not very aesthetically pleasing. It uses a lot of floats, which is built into a tall pillar. After that, follow the balloon flying ship instructions, placing the spheres on top and ballast below. Install the engine and propeller, and add the ballast on the bottom if you have not already, and test fly it. If it does not fly, delete the ballast, and repeat the test flight, and add the ballast again, until it flies. If you are successful, delete the float pillar. If you can fly up, then you won half the battle. Now you should patiently adjust your ship's balance and weight, and reasonably install weapons. Note: more spheres and floats can improve flight capacity.

Warship Craft Flying Ship, the real flying ship without floating block, free flying; There is no under water base, no floating block; These flying ships can easily go top speed and are great maneuver! 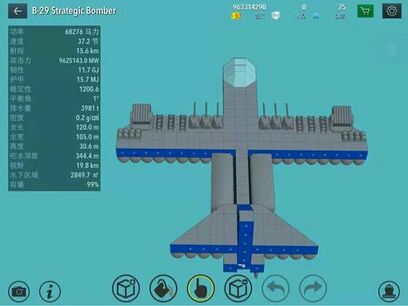 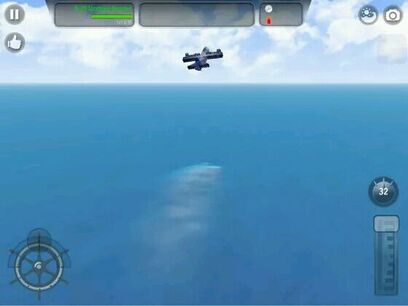 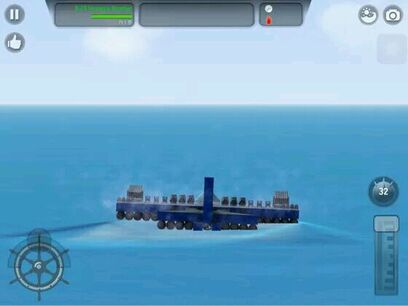 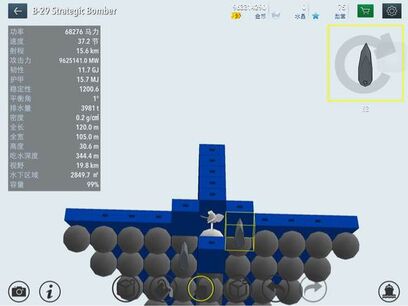 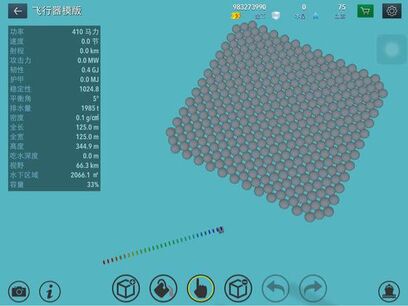 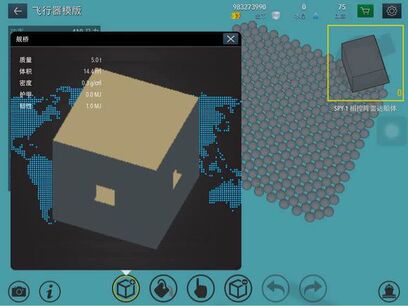 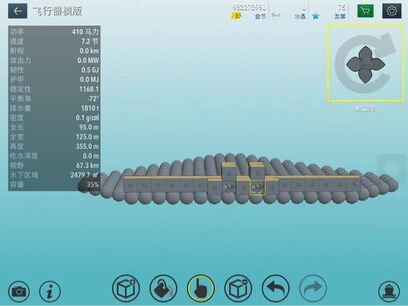 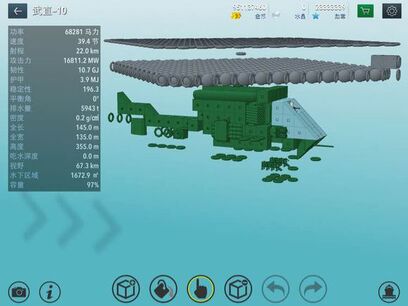 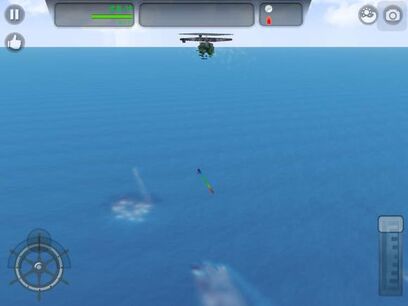 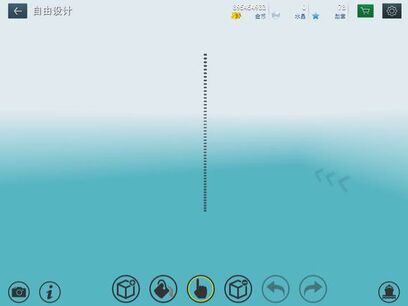 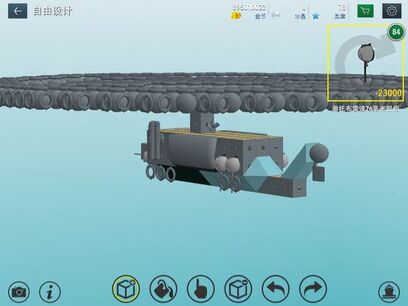 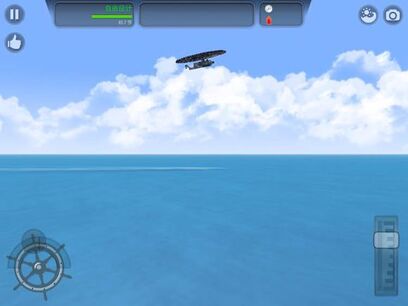 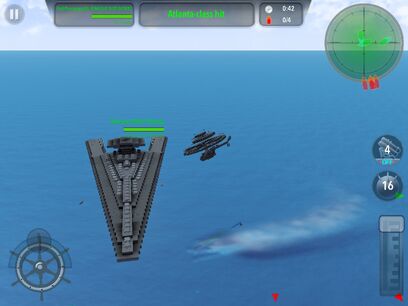 Here is my oldest helicopter. It also shows the sheer size of a nonflying Genivus 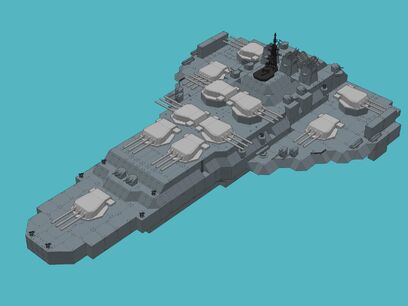 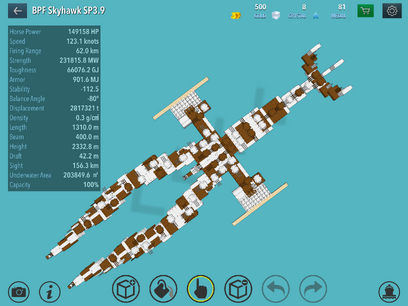 The Skyhawk SP3.9 is one of the BPF's most successful flying ships with a toughness rating of 66k and some 55 46cm guns. It is also one of the fastest flying ships on the WSC seas today with a top speed of 123 knots. It starts battle at 2333 meters and is able to bring heavy punishment to even the toughest of ships with its massive armament and 72 planes. 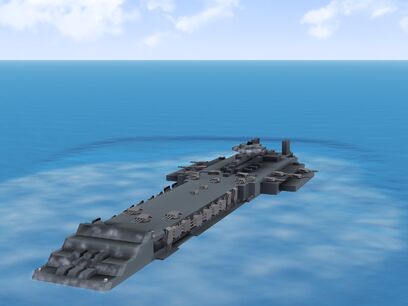 The flag ship in my navy, the super dreadnought class flying ship is a all round good ship, but it does not have aircraft but make up for it with a good AA defense and 35000 thoughness. It is the pride of my navy and with hard work it could be a really strong flying ship. 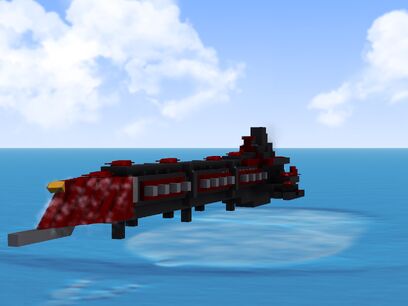 This is the newest addition to my navy and it is the second most powerful ship in my navy, it is armed with 5 46cm guns 4 38cm guns and a lot off 30cm guns, and it has a powerful AA battery consisting of 56 AA guns, the speed is over 20konts and I cruses at 500 meters altitude not the best but I dind want it to fly that high because I want to give my enemy a chance at winning. 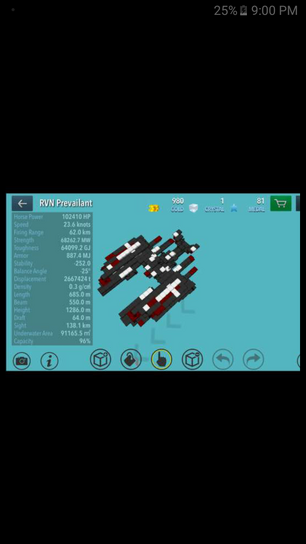 A old, long forgotten legendary beast made by Rifts....the Noble Intention (this version is named RVN Prevalient) It is renowed for recking me many times over and being the only flying warship to take down Preaceptor's Skyhawk the fastest flying ship. It has 84 total aircraft, 50 total 46 cm guns and a whole host of other goodies to bring you pain with a capital P. But, sadly, it was lost.....but may be making a return..

A powerful, long forgotten, beast of a flying ship (let the stats do the talking) it is renowed for defeating the mighty Skyhawk and defeating me many times over. It has 40 46 cm canons, 84 total aircraft, a unique design making it very resilient and a natural ability to instill fear into any seabound super warship that sees it.. This was NOT made by me it was made by my close friend Rifts...not to mention its a mere prototype but still ferocious! 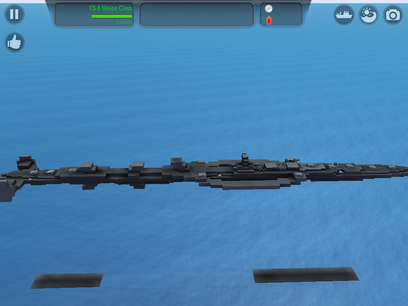 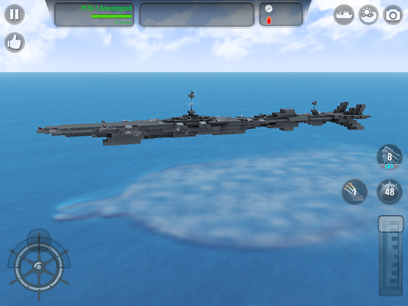 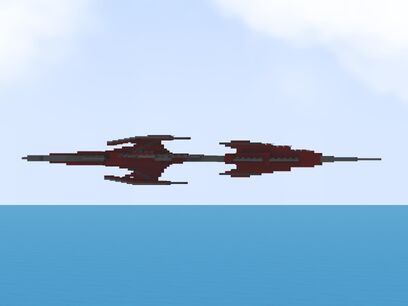 The Impaler, one of the largest flying ships in game with a length of almost 2km and a toughness of almost 80k, she also has 80 46cm guns and 4 CIWS, making her one of the most dangerous non hacked ships in WSC. 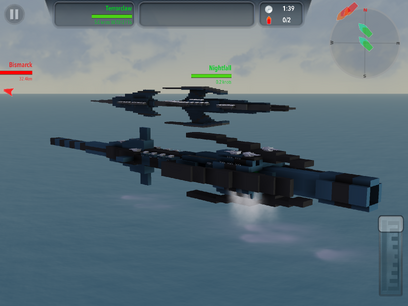 The Impalers sister ship Nightfall and the battle carrier Terrorclaw, the main difference between the Nightfall and Impaler is that the nightfall had 12 triple torpedoes tubes, sacrificing long ranged capabilities for better close range capabilities.
Add a photo to this gallery
Retrieved from "https://warshipcraft.fandom.com/wiki/Flying_Ship?oldid=12739"
Community content is available under CC-BY-SA unless otherwise noted.